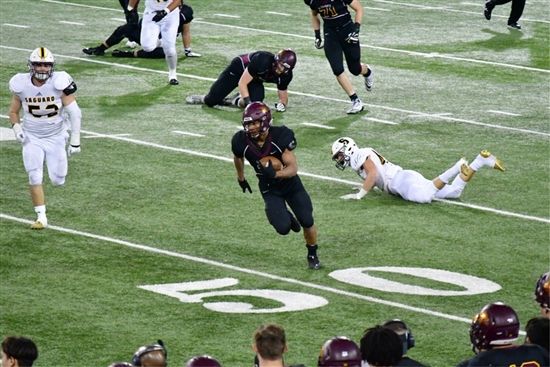 TUCSON — Like at most schools, word tends to spread quickly around the halls of Salpointe Catholic High School. It seemed over the past couple of months each week a big name college coach or two would visit the school to check out Lancer stars Bijan Robinson, Lathan Ransom, Jonah Miller or maybe rising prospect Bruno Fina.

“You get called out of lunch or out of class and then you come back,” Fina said with a smile to Sports360AZ.com. “They go, ‘Where’d you get called out to? Who did you meet?’ Then you say, ‘Coach Brian Kelly was here and they’re like, what?!”

While Salpointe has produced some outstanding players, most recently names like Cameron Denson, Kris O’Dowd and current University of Washington offensive lineman Matteo Mele, never before has SCHS had such a high volume of elite college players at one time.

Robinson could go down as the most decorated prep running back in Arizona high school history, while two-way star Ransom is closing in on 30 offers. Miller (only a sophomore) has offers from Nebraska, ASU, Arizona and others, while fellow offensive lineman Fina has both the size and blood lines to play Power Five football. Fina’s father, John, starred at Salpointe and UofA before an 11-year NFL career.

What’s maybe most impressive is all four players remain focused on their academics, despite the recruiting “distractions” this winter. Fina carries a 4.0 grade-point-average.

“My family and coaches are doing a great job of keeping me focused on school and football,” Ransom explained to Sports360AZ.com. “Not really getting my head too big or anything like that. I’ve enjoyed the process a lot.”

The group of four is also hoping the attention Salpointe is getting will open up a pipeline for some of the other standout players in and around Tucson who may get overlooked by some of the bigger schools. In the past, most college coaches come to Arizona but don’t necessarily make The Old Pueblo a destination point for recruiting.

“The colleges need to see more of the kids around Tucson because they put in work just like we do,” Robinson said to Sports360AZ.com. “There’s a lot more talent out here than the colleges think there is.”

Something tells me the celebrity visits won’t be stopping anytime soon…nor will the offers.
Back