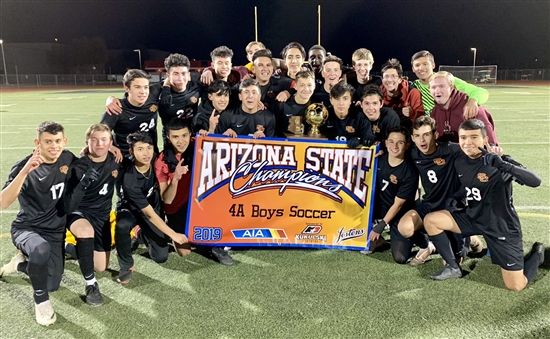 GILBERT — It was a night of near misses, including a penalty kick off the crossbar.

And also a night for another state championship for the Salpointe Catholic High boys soccer team.

“We had some big-time chances, of course, if the second penalty had gone in, it would have been easier at the end,” said Salpointe coach Wolfgang Weber. “I’m just really happy for the kids. For me, I’ve been there 37 years, it’s the seventh time, it never gets old. It’s just fun.”
As it turned out, a narrow angle shot and stout defense were enough on a cold, windy night in Gilbert as the No. 1-seeded Lancers won their seventh state boys soccer title, holding off sixth-seeded Prescott 2-1 in the 4A state boys final at Williams Field.

“We just wanted to get him one more,” said leading scorer Alfonso Cabrera, who knocked an early penalty kick into the right corner to set the tone. “That’s why we worked even harder today.”

The Lancers (18-5-2) scored just 43 seconds into Tuesday’s championship match but had a hard time converting anything else despite dominating possession and showing superior skill over the taller Badgers (16-4).

“Our season was the same way,” Weber said. “We kind of struggled, then we continuously got better. But all the credit goes to Prescott. They played very hard, and fought for every ball and made it very hard for us.”

It wasn’t until the 45th minute that Salpointe finally got back on the scoreboard when Francisco Manzo somehow found the far post on a narrow angle just a few yards from the end line to put Salpointe ahead 2-1.

“He tried to body me off, but I kept myself in front of it,” said Manzo. “From a hard angle, I just tried to shoot it in the corner and it went in.”

With a little more than eight minutes left, Prescott’s Will Ramsay was whistled for fouling Tony Villella near the endline in the goal box. Cabrera lined up the penalty but his left-footed kick banged off the crossbar and was cleared.

The Lancers had history hanging over them with Weber going back to the 1980s at the parochial school and six titles under his belt. Add a top seed and Salpointe had a target on its back.

But that didn’t show during the state tournament as the Lancers outscored their opponents 19-1 in their three games.
“In the first half we tried to do too many long balls,” Manzo said. “In the second half, we learned we needed to pass the ball more.”

The Badgers had never been in championship match. Salpointe is 7-3 in state finals.

“Being a senior, I’ve been here for four years, that’s what I have been going for every year,” Manzo said. “To get it in my senior year, it’s feels amazing. And relieved.”

Salpointe struck first, with Cabrera converting a penalty kick into the right corner with 43 seconds gone in the match.

Salpointe had the majority of possession in the first half but allowed a few lob passes, forcing Dominic Chakraborty to make several stops.

Late in the half, Prescott pressured up front and got the ball to Francisco Rodriguez just outside the box. He knocked it just to the left of Chakraborty for the tying goal.

Salpointe’s superior skill and speedy wings kept the ball in the Badgers’ end for much of the night. But Cabrera’s crosses didn’t
find the right player and his 33rd minute free kick from 20 yards out was bobbled by Prescott goalkeeper Tobias Buettner but cleared. The subsequent corner kicks went nowhere.

Eric Galindo got off a powerful free kick that was cleared by Prescott’s Trevor Cargill in the 23rd minute and Cooper Miron’s shot 10 minutes in was saved by Buettner.
Back