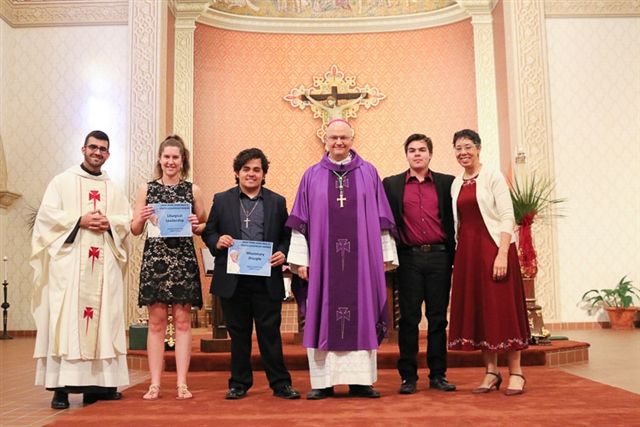 4/17/2019
Each year, the Diocese of Tucson recognizes teenagers who are active in their faith. Bishop Edward Weisenburger presented these awards personally, to convey that the Church recognizes that teens and young people do have an impact in the community.

This award encourages them to keep living their faith and inspires other teens to live their faith as well. Salpointe's Campus Ministry selected three seniors who have shown consistent faith throughout high school.
The award is given for three areas:
Missionary Mercy: recognizes efforts for social justice
Missionary Disciple: recognizes sharing the faith and encouraging other students to be part of faith
Liturgical Leadership: recognizes participation at Mass
Salpointe's 2019 John Paul II Award recipients are:
Brendan Salcido - Missionary of Mercy, for his involvement with Kino Teens and support of migrants.
Adrian Robles - Missionary Disciple, for his warm invitation for other students to attend the Kairos retreat, and for bringing his faith to his rugby team.
Lucy Carter - Liturgical Leadership, for her example and participation at Mass as a Eucharistic Minister.
Congratulations, Lancers!
Back