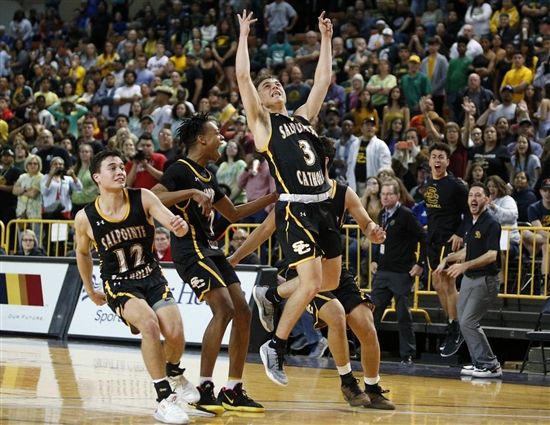 PHOENIX — Braden Miller raced up court and chucked the basketball high in the air. The clock reached 0:00, and the party was on.

Miller’s layup in the final minute of overtime pushed Salpointe’s lead to four points and cemented the long-awaited Class 4A state title.

“Legendary, man. Nobody else has done it,” said Evan Nelson, who led the Lancers with 17 points. “We did it.”

The ball had barely come back down to earth by the time the entire Salpointe team had swarmed the court and tackled each other to form a massive dogpile. This celebration was making up for all of the soul-crushing moments from years past: Salpointe lost in state title games in 2017 and 2018, and fell in last season’s semifinals. The same team, Phoenix Shadow Mountain, eliminated Salpointe all three years.

“We just finished,” Lancers head coach Jim Reynolds said as he watched his players cut down the nets. “That’s been the thing that I think over the three years that I’ve coached that we’ve gotten better at.”

Saturday’s game featured 11 lead changes, and neither team led by more than seven points. The teams were destined for a dramatic finish.

Leading 48-46 with under 30 seconds to play in regulation, Salpointe gave up a second-chance bucket that knotted the game. Nelson’s halfcourt heave came up a few feet short, and the game headed to overtime.

Grant Weitman (15 points) scored the opening basket of OT with a putback, and Miller — the son of UA basketball coach Sean Miller — created the separation Salpointe needed with his first and only score of the game. Leading by four, the Lancers locked down on defense.

Salpointe shot just 36% (9 for 25) from the field in the first half, then recovered to hit half their remaining shots (12 for 24) in the second half and overtime. The Lancers overcame a 7-for-16 performance at the free throw line, hitting them when they counted late. Nelson delivered two late in overtime to extend Salpointe’s lead to six points.
Salpointe has been no stranger to these last-minute battles. Tuesday night’s state semifinal game against Catalina Foothills went down to the wire, with the Lancers staving off the Falcons 56-50.

“For us to be able to win a defensive struggle, we’ve done that well this year,” Reynolds said, citing the Foothills game and December’s Visit Mesa Basketball Challenge, “that was a lot of practice for today.”

After 15 seconds or so, the celebratory dogpile shifted to hugs and then onto the players raising their arms in appreciation to their parents and fans. The Lancers gathered at midcourt to receive the state championship trophy, the gold-colored basketball on the trophy perfectly matching the gold trim on Salpointe’s jerseys. They seemed meant for each other.

“This school’s been around a long time, I don’t know if you can put this into words,” Reynolds said. “For us to be the team that did it, you just feel an enormous sense of pride.”
####
Back