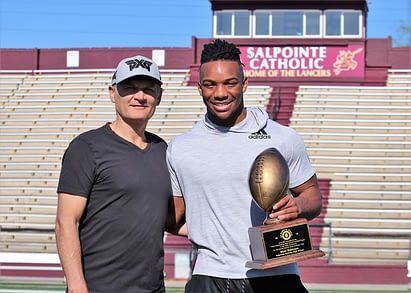 5/18/2020
All Sports Tucson
Bijan Robinson '20 wakes up at the crack of dawn on a Saturday (and many other days) to weight train at Salpointe. The diligent Carla Garrett, a former Olympian at Arizona, was there on this day to train Bijan and former teammates Lathan Ransom and Trent Strong. Bijan knows she won’t take it easy on them.

His grandmother Gerri Robinson once told him to ask Garrett about being her personal trainer. Gerri mentioned Bijan came to her saying Garrett was somewhat hesitant of having to get on her like she does Bijan during some of those intense workouts.

Gerri and grandfather Cleo helped Bijan’s mom Lamore raise him under their roof.

The early alarm to routinely work out means “he leaves the house by 5:30,” Gerri said.
“I don’t even know when he leaves,” Cleo said incredulously.
“I hear him,” Gerri said.
They shook their heads and laughed.

That dedication shows why Bijan, who is headed for Texas, became the most talented high school football player in Southern Arizona history and one of the best produced by the state.

This morning, after Bijan’s workout along with Ransom (Ohio State bound) and Strong (SMU), Gerri and Cleo stood at midfield at Salpointe’s Ed Doherty Stadium — a fitting location — to share in another of their grandson’s many proud accomplishments.

“It’s a blessing first of all,” Bijan said. “God brought me to this point. Being here with my coaches and with the family — I know we’re in a bad time right now (with COVID-19) — but I feel it is a blessing being here and spending time with everybody before I go off to Texas.”

Never before in the 28 years of the Ed Doherty Award’s existence has somebody earned that distinction outright twice.

Robinson, built like a rock at 6-foot and 215 pounds, ended his career setting the Arizona big-school record with 7,036 yards rushing on 527 carries — an average of 13.2 yards per carry. He also holds the state record in career touchdowns (114) and big-school rushing touchdowns (103).

Think back to the days of Sahuaro’s Mike Ciasca, Amphi’s Mario Bates, Marana Mountain View’s Kevin Schmidtke, Palo Verde’s Adam Hall and CDO’s Ka’Deem Carey — all of whom have earned the Doherty Award. Those greats accomplished the honor once.

“It’s fitting for us to be standing out here at Doherty Field because the whole history of Ed Doherty as the head coach at Salpointe High School and St. Mary’s, and as everybody knows, Ed Doherty was here at Salpointe as the athletic director,” Gridiron Club president Ward Hickey said. “Coach Bene was his last quarterback at Salpointe, so it’s really special that Bijan’s the only one who has won it twice.”

Former Scottsdale Saguaro quarterback Teddy Ruben, who went on to play wide receiver at Troy University, earned the Ed Doherty Award in 2010 and 2011. His honor in 2011 was shared with four other players, including Carey.

Cleo, a Marana football and track and field legend, looks beyond all the trophies and accolades his grandson has earned. To become that special, Bijan had to first establish himself with a character befitting of how he was raised by him and Gerri.

“I’m very impressed. He has been a tremendous kid,” said Cleo, a longtime referee who is a replay official with the Pac-12. “He’s one of these guys that when people give us comments about him, the first thing they say is that he is a great guy. That means a lot to us.

“In the past couple years, he has taken his academics seriously, and he’s doing real well in that area. He’s a guy who is well-balanced. He can think for himself and make good decisions. For him to leave home, there is some uncomfort zone, but for the most part, we know he’s a kid that can take care of himself.”

NOTABLES
Third player in Arizona history to rush for 7,000 yards.
Only player to have three 2,000-yard rushing seasons.
View full article at All Sports Tucson.
Back