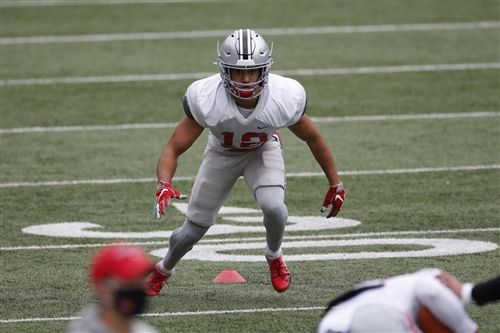 Players from Tucson were well represented across the country during the 2020 college football season. Nine of the featured players are Lancer alumni.

Bijan Robinson '20
Running Back, Texas
Could Robinson be among the Heisman Trophy contenders in 2021? It's not a crazy thought given the running back's remarkable finish to his freshman season. The Longhorns tailback rushed for 172 yards and 183 yards in his final two games of the year, averaging 18.6 yards per carry. And no, that's not a typo.
The 6-foot, 220-pound freshman led Texas in rushing, carrying the ball 86 times for 703 yards and four touchdowns over the course of the year. He also showcased his receiving ability, catching 15 passes for 196 yards and two scores. Expect No. 5 to be the clear featured back for the Longhorns going forward.

Lathan Ransom '20
Safety, Ohio State
Lathan Ransom's freshman season still has one more chapter to be written. The Ohio State defensive back is the lone Tusconan competing in the College Football Playoff National Championship Game. Ransom played 28 snaps in the Buckeyes' semifinal victory over Clemson, eclipsing the 24 snaps he had played in the six games prior. He was used as the fifth defensive back when OSU deployed nickel coverage. If the Buckeyes play nice against No. 1 Alabama, Ransom could contribute to a national championship.

Matteo Mele '18
Offensive Lineman, Washington
Mele competed for the Huskies' starting center position in training camp but was beat out by senior Luke Wattenburg, who started all four games. Mele's only action of the season came against Arizona, and the Huskies ran all over the Wildcats on the way to a 44-27 victory. The junior will try to win the starting center's role in the off-season.

Bruno Fina '20
Offensive Lineman, UCLA
The son of UA legend John Fina '87, Bruno Fina just wrapped up his first year as a Bruin. The 6-4, 260-pound lineman didn't appear in a game during the shortened season, meaning he likely received the redshirt designation and will work to earn playing time next year.

Derick Bush '18
Cornerback, Coastal California
Many college football fans didn't know what a Chanticleer was at the beginning of the season. They do now. Bush started at cornerback during Coastal California's dream season, helping the program to an 11-0 regular-season record. The junior had 41 tackles, six pass breakups, and one interception in 12 contests.

Trent Strong '20
Linebacker, SMU
One of Tucson's top linebackers in 2019, Strong didn't play during SMU's 7-3 season but adds depth to one of the AAC's top programs.

Mario Padilla '19
Defensive Back, Ole Miss
Padilla walked on at Ole Miss at the beginning of 2019, but announced his plans to transfer in December. The UA originally offered Padilla a scholarship in 2019 during his high school recruitment.


Photo of Lathan Ransom by Jay LaPret
Back