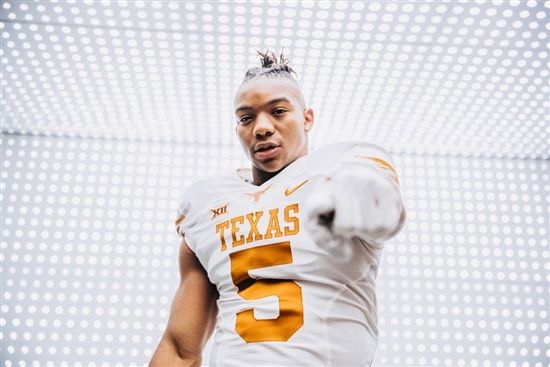 Bijan Robinson '20 reflects on first season at Texas, how Salpointe prepared him for college

Bijan Robinson is as humble and grounded off the field, as he is lethal on it.

The Tucson Salpointe legend, widely considered the top prep running back in Arizona history, capped off his true freshman season at the University of Texas being named the Alamo Bowl Offensive MVP in the Longhorns’ 55-23 win over Colorado in December.

“Zone Read” sat down earlier this week with the Tucson native to discuss a wide range of topics.

From an academic standpoint, how much did Salpointe prepare you academically because UT definitely provides a high-level education?
“Salpointe is a hard education. In my four years, I had to take all seven classes throughout the day and they were all hard. I feel it over-prepared me for college. When I got to college, it was easy. Of course, Texas is hard but it’s not crazy-difficult where you couldn’t handle it at Salpointe. You have four classes here but I had seven classes at Salpointe.”

One of my favorite things in getting to know you Bijan is your humility. You’re usually the best player on the field but you never act like it. Texas is rich in running back history: Earl Campbell, Ricky Williams, Priest Holmes, etc. I’ve heard the “Little Ricky” comparisons already. How are you staying humble and grounded with all the hype surrounding you going into your sophomore season this fall?
“I’ve just got to keep the same as it’s always been. I know there’s a lot of hype out there with the Heisman [Trophy]. I don’t listen to all that stuff because that stuff can get to you and if you start listening to it you’ll start not working as hard and getting comfortable. God has a plan and I just have to keep following it. Coach Drayton has been a great help. He’s kept me level-headed. I don’t need to listen to anything great that comes out of anyone. I try to think of everything as a bad situation and I have to outwork that bad situation. I just have to keep being the same as I’ve always been. Even my grandparents have helped me throughout this whole time to just ‘stay me’ and keep being humble.”

Salpointe had a really good season last year advancing to the Open Division Playoffs again. Did you keep a close eye on what was happening back in Tucson?
“I did. I’d make sure every Friday I’d see the stats and make sure how they were doing. I’m glad they had a great season.”

One of those impact players from the Class of 2020 is your close friend and former Salpointe teammate Lathan Ransom who made some big plays at safety last season at Ohio State. How proud are you of what he accomplished and how frequently do you stay in touch?
“We talk all the time. We talk before games. Even the game before he was about to start [the Big Ten Championship Game against Northwestern], I was like, ‘Bro just go in there and have fun. You have the gifts to do this. You were built for this.’ He told me his experiences before he got out there in his first game. I just said, ‘You’re gunna ball. It’s different than high school but just think of it as a different stage, at a different level.’ That’s what he did.”
“We talked before the National Championship [against Alabama] and I was like, ‘You’re covering some top receivers that are going to the NFL. You just need to stay calm and just keep being you and everything is going to be alright.’”