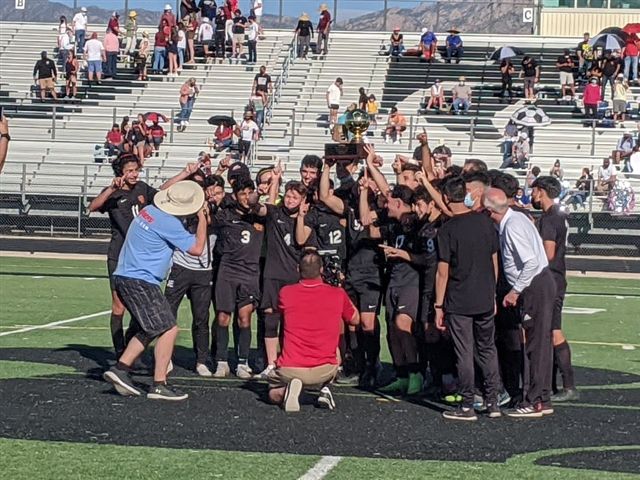 3/22/2021
Article from All Sports Tucson:
Led by solid defense, and a stellar performance from freshman midfielder Adrian Franks, Salpointe beat Walden Grove 5-1 on Saturday to capture the 4A state championship at Mountain View High School.

It is legendary coach Wolfgang Weber’s eighth state title and the 699th win of his 39-year coaching career.
Sophomore forward Nico Valenzuela, and junior defender Sergio Ruiz De Chavez each scored a goal, but it was Franks’ hat trick performance that stole the show.

In a closely matched first half, Valenzuela scored a goal in the first minute of play, before Walden Grove’s senior midfielder Alex Oquita evened the score in the 24th minute.
Chavez scored in the 38th minute, putting Salpointe (14-0-1) ahead 2-1 at halftime.

In the second half, the Lancers never looked back, fueled by Franks’ three goals and strong a defensive effort.

In a game where Waldon Grove (10-3) struggled to get shots on goal, the Lancers stifling defense paired with their offensive firepower was too much in the end.
Walden Grove had the most successful season in school history, playing in its first state championship.
Coach Ryan Atkinson puts the season into perspective by saying, “All the credit goes to the team, they put the work in for the season.”
“First year in our history to make it to the final, and I’m really proud of the boys and everything they put into the season for sure,” said Atkinson.
Senior streaker Adrian Alvarado lost his father to COVID-19 prior in December, and that significant loss was a motivating factor for Walden Grove’s success this year.

“It’s definitely tough to lose someone that somebody loves that’s a big part of the program,” Atkinson said of the elder Alvarado, who was a school monitor who was part of every game and practice for Walden Grove’s football and boys soccer teams.

“It’s definitely tough, but the guys responded really well and made sure they were a family unit, and it really helped Adrian as well to get through the tough times he’s had.”

While Walden Groves will try again for a state title next season, Franks and Salpointe will relish their championship moment.

“We’re just a close group. We work in training. We stay focused on the prize. We don’t get too cocky. We make sure we focus on the end goal and here we are,” Franks said.
Although Weber is only one win away from his 700th career victory, it is not believable because of how he humbly deflects any sense of credit and achievement to his assistant coaching staff and players.

“I’ve said this a couple of times and I’ll say this again, it was all about this year’s team,” said Weber.

“It feels good to get some recognition for the 39 years that I’ve been there, but I tell you this is real special, I’m really happy for them. Let me also say that it’s not just me, but it’s my associate head coach Luis Gonzalez, he has been there the whole year carrying the large burden of the daily training.”

On a sunny afternoon, on the first official day of spring, Weber smiled and watched his team bask in the glory of a 4A state championship.

“I’m just a blessed person to have this great group of kids and a great staff,” he said.
###
Back