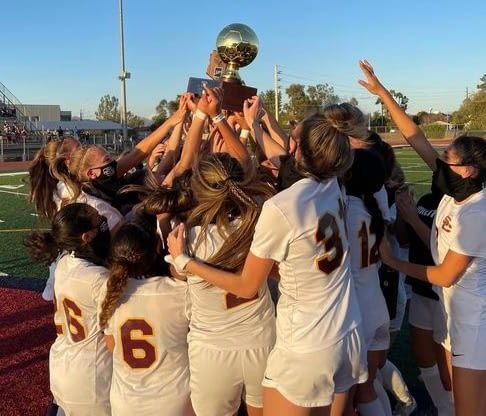 “By winning a state championship,” he told them as they stared at him in suspense, “you automatically are inducted into the Salpointe Hall of Fame as a championship team.”

That led to more hysteria for the third-seeded Lancers, who closed their 12-0-1 season with a 2-0 win Saturday over No. 1 seed Prescott, which suffered it first loss and finished 16-1.

That Hall of Fame is getting crowded. This is the fourth state championship team for Salpointe in the last five years.
Salpointe alum Kelly Pierce, who won two state titles as a player in 1998 and 1999, has now coached the Lancers to three championships. The previous titles occurred with her first two teams in 2017-18 and 2018-19. The year before she returned to her alma mater, Becky Freeman coached the Lancers to the state title.
The program has won seven state championships overall.

“I think they are all unique and we had different strengths in each group,” Pierce said of the championship teams she has coached. “I really think the team chemistry with this group and how good they get along, especially having 26 girls on our roster, was tremendous.

“You also factor in what they had to go through with Covid (delaying the season), all these things going against them, they just really wanted it from the bench to the field. Our bench is always our 12th player. They are up all game and supporting. I think that chemistry, that support, sticks out the most.”
It took Salpointe until the 56th minute to score its first goal, off a long kick from the side from Trinity Morales that freshman Anjeli DesRosier got her foot on in the box to scoot the ball past Prescott’s goalie.

Salpointe attacked consistently more than Prescott in the second half and the Lancers’ goaltender Madison Smith was impeccable.

The second goal was scored by Morales, a junior, on a 25-yard boot that hit the net above the goalie’s head at the 73rd minute.

“It was a little bit of a rough start of the game; I think the moment got a little big for a minute, but they adjusted at halftime,” Pierce said. “After we chatted and got everyone to calm down, we played better. You can tell the grit and tenacity about them. They did not want to leave here without a victory.”

Morales mentioned what makes Salpointe a champion is its “community” feel. That was no more apparent than DesRosier and Morales being integral parts in their first year with the program. They fit right in with the eight seniors on the team.

“I’m excited I got to be on this beautiful team,” Morales said. “We all came together and the coaching staff is wonderful. … We’re really a tight-knit group. We work hard. We push each other in and out of practice.”
DesRosier, who comes from a soccer family, did not get caught up in the moment because of her Lancer family.

“It’s amazing, I can’t even explain it,” said DesRosier, whose sister Milana is a freshman midfielder at Idaho. “It’s just so fun to play with people who are older and people of all ages. Being in high school is a totally different experience.

“I wasn’t expecting anything that great at first (as a freshman), but when I met my team, and saw who was on the team, I knew at first we could do anything.”
The day closed with Salpointe taking home the boys and girls state titles. The legendary Wolfgang Weber achieved his eighth state title as the coach of the Lancers’ boys team with a 5-1 win over Walden Grove in that championship match.

“I gotta catch up to him; I’ve got some work to do,” Pierce said with a laugh.

As she spoke, about 15 minutes after the championship match ended, some of her team was still screaming in jubilation and leaping while hugging each other.

“This is the group of seniors who I started with four years ago (in 2017-18) when we won (the first of the consecutive titles),” Pierce said. “I remember a few weeks ago, during the season, we said we wanted to have them end their career the way we started.

“It means a lot to me, obviously, because we’ve dedicated a lot of coaching to these girls, and we ended up caring for them way more than anyone could ever imagine. I’m super proud of them.”
####
Back