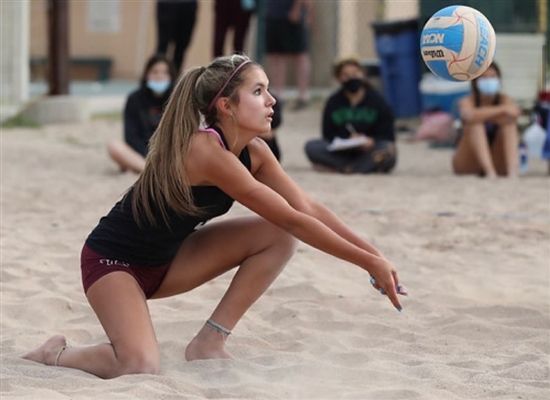 5/14/2021
For many student-athletes, being part of just one state championship team during their four years in high school is a remarkable accomplishment.

For Salpointe sophomore Rylen Bourguet ‘23, she was able to pull off the unthinkable: three state titles in one year! Rylen competed on the Volleyball, Soccer and Beach Volleyball teams, which all won the state championship this past school year.
“I’ve been blessed with amazing coaches for volleyball and soccer, and of course my teammates helped me along the way,” Rylen said. “It’s not a solo act. I wouldn’t be where I am right now without them.”

Enjoy the following article from All Sports Tucson:

When you hear the name Bourguet in Tucson sports, many people instantaneously think of Trenton or Treyson, the two all-star quarterbacks who have been lighting up the field in recent years under the Friday night lights. However, one of the lesser talked about members of the family is arguably one of the greatest athletes of them all, and that’s Rylen, a sophomore and stellar three-sport athlete.

“I’ve been behind (Treyson) all these years and now that we’re at the same level in high school, I just want to be myself and do what I can do to shine,” Rylen said.

If you ask Treyson, he will humbly admit how great of an athlete his sister is. He talks about her dedication, and how he often spends time taking her to and from practice since she still isn’t able to drive yet. He joked although it can sometimes be a pain, he’s happy to see his sister’s hard work paying off, and even decided to forego participating in a spring showcase to be sure he was there for the championship game.

“We put our faith first, then family, then everything else is beneath that,” mother Vanessa Bourguetsaid.

Thursday, all of the dedication and sacrifices made not only by Rylen but by the entire Bourguet family paid off when Rylen and her partner Emma Hugeback helped Salpointe take home its first-ever beach volleyball championship.

The three-sport all-star also helped the Lancers take home both the indoor volleyball state title in the fall and the girls' soccer title in the winter, accomplishing a nearly unheard of achievement of winning three state championship titles in a single school year.

“I am beyond proud, and it really is a testament to the hard work she has put in for many years, as well as the fun kind of work she’s been doing with her brothers since she was little trying to keep up with them. So, it’s neat to see this come out of something that started out as just something fun to keep up with her brothers and she’s able to achieve something of her own. We can all be proud of her for that,” Vanessa said.

“I’ve been blessed with two amazing coaches, both for beach volleyball and indoor volleyball and then soccer, and of course my teammates helped me along the way, you know it’s not a solo act. I wouldn’t be where I am right now without them. I’m just blessed with great teams and great coaches,” Rylen said.

At just 15 years old, she truly understands what it means to work hard and the amount of effort and focus it takes to succeed while still having passion and love for what she’s doing. In fact, one of the reasons she feels so supported by the entire coaching staff at Salpointe is because they allow her to be a multi-sport athlete and don’t pigeonhole her to on specific focus.

The overlap between seasons can sometimes become a struggle, as Rylen did have to miss a number of early practices due to the post-season.

“Rylen balances a lot, having to play soccer and play volleyball, and I have to share her and it’s not always easy. I had to make a lot of concessions for Rylen so she could play volleyball,” head Beach and Indoor Volleyball coach Heather Moore-Martin said.

However, coaches are happy to accommodate her when possible because they know what a valuable asset she is to have on their team.

“She definitely brings a winning attitude. No messing around,” Moore-Martin said.

With two older brothers, one of which already in college playing football and another currently going through the recruitment process, she’s no stranger to the recruitment process and what it takes to make it to the next level. Not only is she dedicated to athletics, but also to academics. As issues surrounding Covid-19 continue to ease, it’s beginning to become easier to start looking forward to the future. Rylen knows her junior year will be a critical year, and she’s preparing to dominate it on all fronts.

“She’s getting it done in the classroom, as well. I just asked her the other day, ‘What’s your GPA’ because we have to put that on her highlight video. She said ‘I think it’s at least a 3.8, it might be a 3.9.’ And that, to me, to have that package I could not be more proud. State championship rings are phenomenal, but you couple that with the dedication she does in the classroom, the sky is the limit,” Vanessa said.

Rylen’s commitment to being the best student-athlete she can be is something that inspires a lot of people who cross paths with her in one way or another. On the court, a number of girls look to her as a north star of sorts to help lead the team, but those aren’t the only people whose lives she’s touched.

“She is an absolute inspiration for all of her younger cousins, and for me, it makes me want to be a little bit healthier. I decided recently to do a little bit more things that I can keep up maybe halfway with her, because I want to be a good example for her and follow in her example of how active she has been and so motivated in being that way. So she’s been an inspiration for me, as well, and she might not know that” Vanessa said.
Although summer break officially starts next week for Salpointe, there’s no off-period in sight for Rylen as she begins club soccer next week. She knows the upcoming year is going to be critical for her future and she can’t wait to get to work and keep grinding towards her goals.

“Now’s definitely not the time to slack off, just because I got these accomplishments this year doesn’t mean next year they’re going to be handed to me. It’s going to take twice as much work because now that we’re at the top, we’ve gotta stay there,” Rylen said.

“I cannot express how proud I am of her. It’s amazing to see her work ethic,” Vanessa said.
Back