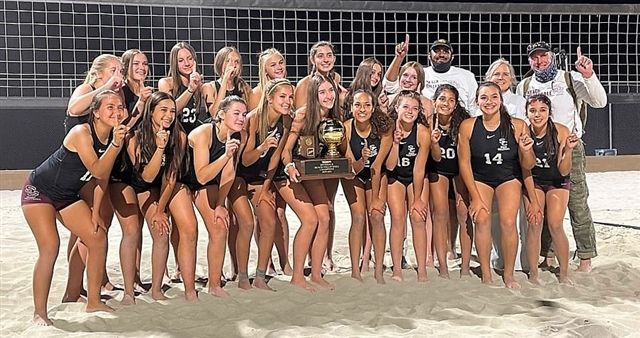 he top-ranked Salpointe Catholic Lancers captured their first-ever beach volleyball state title on Thursday night when they defeated the no. 6 Valley Christian Trojans 4-1 at Casteel High School in Queen Creek. It was a highly anticipated moment for many of the girls, amplified more by last year’s cancellation of the season due to the pandemic, and for Salpointe Catholic, the victory couldn’t have been more sweet.

“I’m just blessed. Look what happens when we have a full year, we get to show what we have,” sophomore Rylen Bourguet said.

Salpointe got things off by taking both matches in flight one. On court three, sophomore Gabrielle Monge and junior Leah Palomares got things going with a dominant performance, killing Valley Christian 21-9 in the first set and sealing the victory with a 21-12 win in set two.

Meanwhile on court six, freshman Megan Muehlebach and sophomore Jalynn Ransom had a little tougher battle ahead of them. After starting the first set trailing the Trojans 10-6, Muehlebach and Ransom were able to shift the momentum in their favor and come back to tie things up at 16. From there on out, the Lancers were able to ride the energy to a 21-17 victory in set one. Set two was more of a back and forth battle for who was going to take the lead up until the set was tied at 16, yet again. However, the Lancers proved they wanted it more and were able to close the set out 21-17 to take the set and the match, giving Salpointe a 2-0 lead.

In the second flight, sophomore Francesca Pieroni and freshman Sophia Hernandez were able to cruise to a 21-16 victory in set one after taking the lead about midway through. The second set proved to be a tougher challenge, as it was a back and forth battle until things were tied up at 15. At that point, Pieroni and Hernandez were able to break away and fight on to a 21-17 victory.

“Just being determined to win, and not playing with the scoreboard but playing with your partner and going point for point, that’s where we’re at and what we strive to achieve,” head coach Heather Moore-Martin said, talking about the fight in her players to get the come-from-behind win.

On the other court, Bourguet and junior Emma Hugeback dominated to win the first set before being challenged a bit more in set two, where they were eventually able to pull away to a 21-16 victory and win their match.

At this point, Salpointe had already secured the state championship, so there was a slight bit of pressure lifted from the girls in the third and final flight. Seniors Andrea Owens and Brandy Kishbaugh put up their best fight, but unfortunately dropped both set one and two to Valley Christian to round out the competition.
As soon as the match was complete, the Lancers stormed the court to celebrate the championship victory. For a number of girls, it was their second state championship of the season, as many of them played on the championship indoor volleyball team in the fall. For Bourguet, however, it was a rare and incredibly difficult achievement of three championships in one school year, as she also helped lead Salpointe to a girls soccer ring.

“Rylen balances a lot, having to play soccer and play volleyball I have to share her and it’s not always easy. I had to make a lot of concessions for Rylen so she could play, and I’m always willing to do that because of the fact that she’s in high school,” Moore-Martin said. “She definitely brings a winning attitude. No messing around.”

With Owens and Kishbaugh being the only two seniors, the Lancers have an incredibly bright future with their returning players next year, as their roster will have quite a bit of depth. Moore-Martin says the duo also left a lasting legacy on the program and has helped show the younger girls what it takes to succeed.

“They’re gonna leave behind the idea of dedication and determination and that they have to commit and spend a lot of hours with the game to be the best they can be,” Moore-Martin said.

Salpointe’s Owens and Kishbaugh will have another shot at winning a separate title in the D-II Pairs State Championships with round one beginning next week on Tuesday, May 18th at Casteel High School. Owens and Kishbaugh are a top seed and will face Grace Abrams and Mia Kohoutek of Fountain Hills to determine who advances to the quarterfinals, also to be played Tuesday evening.
####
Back