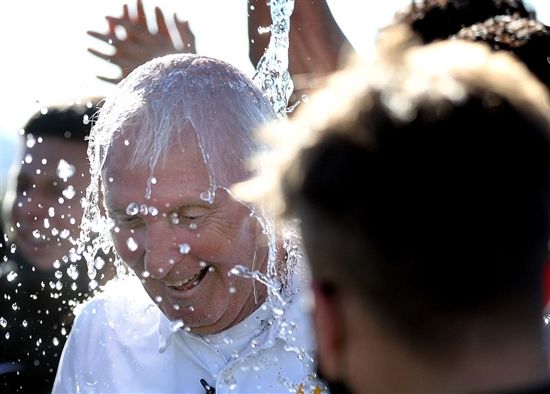 Hansen's Hundred, No. 32: Wolfgang Weber the father of Tucson soccer

Wolfgang Weber was going to be a chef. Correction: He was a chef. A good one.

In 1973, Weber spent about $29,000 — $200,000 in today’s money — to buy a 70-seat coffee shop in downtown Tucson. He and his wife named it Benjee’s. Weber cooked full time and quickly developed such a reputation that the Tucson Citizen wrote a feature story on one of his favorite dishes, rinder-rouladen, which is basically a beef roll with an German twist.

Not only did Weber bring his cooking skills with him from his native land, Germany, he brought his love for soccer. He had played extensively with the Victoria Alsdorf soccer club as a young man, 1955-65, and later played in high-level semi-pro leagues in Germany and Switzerland.

It didn’t take Weber long to help establish the Tucson Metro Soccer League and much more. In 1977, he was the co-founder and head coach of the Tucson United Soccer Club. By 1982, he became the first coach of Salpointe Catholic High School's boys soccer team.

If he's not the Father of Tucson Soccer, who is?

And that might not even be his top accomplishment in Tucson soccer. He is co-founder of the vast FC Tucson Youth Soccer organization (initially known as the Tucson Soccer Academy), which serves as many as 2,000 young soccer players each year and, over several decades, has trained 30,000 kids.

Ever modest, Weber has never been an it’s-all-about-me type of coach. When I asked him last winter if my research was accurate — would winning an eighth state championship put his career victory total at 699 — he all but shrugged it off.

"I’m not sure," he said. "I’ve been at it so long that it’s hard to keep track."
No other prep soccer coach in Arizona history had won even 500 games. His closest pursuer in boys state championships, Cactus High School’s Jack Altersilz, retired with six titles a decade ago.

Now in his 70s, Weber has survived the death of his wife, Nina, a near-fatal heart attack and a triple-bypass heart surgery. He said he plans to coach his 40th season at Salpointe when school opens next month.

"What amazes me about Wolfgang is that he has not lost a step," said Ted Schmidt, who is president of FC Tucson Youth Soccer, one of the key operatives in Tucson soccer the last 30 years. "He’s just a wonderful man."
It’s not like the competition in Tucson prep soccer is at the default-level. It’s just the opposite.
Since Weber coached the Lancers to their first state title, an undefeated 16-0 team in 1985, Tucson boys soccer teams have won 18 state championships. Julie Walters coached four title teams at Catalina Foothills; Roxanne Taylor has coached Rincon/University to three state championships. In the last 10 years, Sunnyside, Tucson and Pueblo have produced boys state championship soccer teams.

Along the way, Weber hasn’t been reluctant to build his coaching skills. He was the head coach of the Tucson Amigos, a minor-league franchise, from 1991-96. He was an assistant coach to the USA Junior National U17 team in the 1990s. He was president of the Arizona State Soccer Association for 12 years.
Not all has gone easily. Four of Weber’s Salpointe powerhouses — 2000, 2003, 2006 and 2017 — lost heartbreaking state championship games. Those teams had a cumulative record of 92-13-2. Yet he stuck with it, bounced back and led the Lancers to state championships in 2012, 2013, 2019 and 2021.

"I’ve been blessed with wonderful student-athletes in this community," he said in February. "It’s been an honor to be given the chance to do what I love to do for so long. I would’ve never dreamed I could be part of something like this."
Back