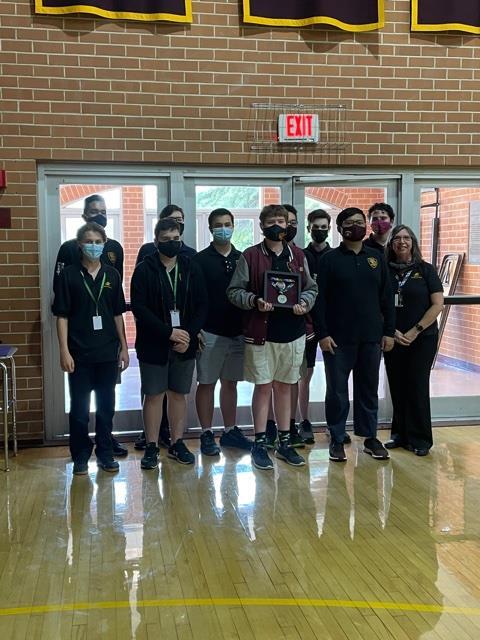 Mrs. Kay Sullivan, Salpointe President, congratulated the team:
"On behalf of the Salpointe Catholic High School faculty, staff and students, I offer our Esports teams profound congratulations on their amazing success in the inaugural year of AIA competition, earning the State champion runner up! Our athletes have shown energy, determination, commitment, resilience and talent in a time of unexpected challenges and especially during a global pandemic."
The banner for the Esports team's first championship battle and future competitions was sewn by Salpointe’s Campus Ministry Director, Mrs. Lisa Astrouski. Felipe Garcia ‘23, Lead Content Creator and 2021 Esports Trailblazer, offered a prayer of thanksgiving for last year and intercession for continued blessings this year. Joshua Ball ‘23, Varsity League of Legends Esports Athlete, presented a State Runner-up medal to Mrs. Sullivan to display in Salpointe’s trophy cases.
Coach Amy Ball closed the celebration with gratitude for the continued support of Salpointe’s Esports team, “In our second year, we are thrilled to practice and compete on campus! Thank you, all, for your continued support of Salpointe’s Esports Team. The difference you’re making for us is priceless!”
As Salpointe Esports enters its second year, esports is gaining in popularity in Arizona. On August 16, 2021, the AIA Executive Board officially approved esports as a sanctioned activity upgrading its status from an emerging activity. According to the AIA, 35 high schools participated in the fall of 2019 and expanded to 66 schools in the spring of 2021. Both the University of Arizona and Arizona State University launched their first competitive esports teams this school year.
This year, Lancer fans may watch the team compete live in League of Legends on Tuesdays and Rocket League on Thursdays at 4pm on twitch.tv.  Follow Salpointe Esports on twitch, youtube, and twitter: