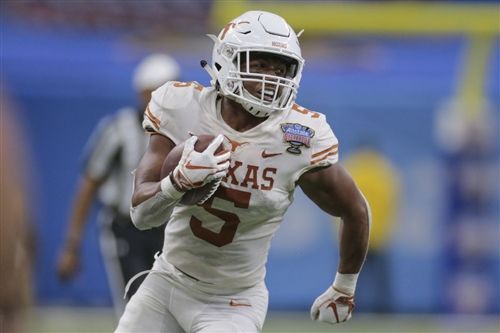 1/7/2021
By Tom Danehy, Tucson Local Media
Every now and then, Tucson football fans have the melancholy experience of watching a homegrown talent strutting his stuff at a college other than the University of Arizona. We watched Jon Volpe lead Stanford in rushing. We were thrilled watching Riki Gray (Ellison) play linebacker at USC. And we were aware that Mario Bates played for Arizona State (but we really didn’t care all that much because it was ASU).

The latest Tucson football expatriate breaking our hearts as he streaks across our flatscreens is Bijan Robinson '20, late of the Salpointe Catholic Football Factory and currently with the resurgent University of Texas Football Factory. After a slow start in his freshman season, he exploded late in the COVID-ravaged season and announced his national presence with authority in last week’s Alamo Bowl win over Colorado.

Robinson put up crazy, video-game numbers at Salpointe. His stats and exploits just scream off the page. Only player in Arizona history to be State Player of the Year twice…Arizona’s career touchdown leader (114) and its all-time leading rusher (7,036 yards)…Had 430 yards and six touchdowns on only 13 carries (average of 33.1 yards per carry) against Desert Edge…16 carries for 347 and six TDs against Casa Grande…Eight carries for 282 yards and four TDs against Tucson High…and how about this: Four carries, three touchdowns and 247 yards against Vista Grande (an average of 61.8 yards per carry)!

In his first three games for the Longhorns, he gained a pedestrian 67 yards on 14 carries. He didn’t look lost, but he did appear tentative. As Texas Coach Tom Herman chose to go with more experienced running backs, Bijan would be in for a couple plays and then disappear for several series. (Inexplicably, that pattern reemerged in the first half of the Alamo Bowl.)

Then, as his playing time and number of carries increased, so, too, did the fortunes of the Longhorn program. After a 2-2 start, they won four of their last five. Against Kansas State, he had 172 yards rushing and three touchdowns on only nine carries. (Odd fact: His 19.1 yards per carry average broke a 69-year-old Texas record by Gib Dawson, who played at Arizona’s Douglas High School.)

All of that led up to his monster performance against Colorado. On his first carry, he busted one for 25 yards. A couple plays later, he scored on a super-athletic play, going full horizontal and stretching the ball across the goal line while somehow keeping his knee off the ground. On the next series, he caught a little dump-off pass from the QB and turned it into a nifty TD catch/run.

He would finish the game with 183 yards rushing and a touchdown on only 10 carries and 37 yards and two more TDs on two receptions. He ended the season averaging an eye-popping (and school record) 8.2 yards per carry. For the next couple years, Bijan will be the face of the Longhorn offense as Texas attempts to regain its place of national prominence.

When Richard Pryor was a teenager, he said something to his father, to which his dad responded icily, “You wanna get that bass out of your voice?” That came to mind when I spoke to Bijan after his yeah-that’s-right! performance in the bowl game last week. When I first met him, he was still a kid—polite, respectful, always smiling. His voice still had some squeak in it back then, as though it—and-he—hadn’t quite finished negotiating the blind curve of adolescence.

Now, he sounds as if the voices of Barry White, Larry Graham, and James Earl Jones all got together in a secret lab and had a voice baby, which they then had implanted into a kid from Tucson. Anyway, Bijan is still as polite and cheerful as ever, only now he has burst onto the national stage and his voice exudes quiet confidence and absolute joie de vivre.

One really cool thing is that I once taught him a neat trick on how to square numbers in their 50s. It’s been years since then, but when I asked him what 52 squared is, in seconds he (correctly) responded 2,704.

Because of strict pandemic protocols (in the football program, not in the state of Texas), Bijan hasn’t been able to experience a whole lot of the hip college town that is Austin. He has thrown himself into his studies and has decided that he wants to major in theater and acting. We talked at length about his actor influences and their respective signature roles. His favorite? Marlon Brando as Stanley Kowalski in “A Streetcar Named Desire.”

He said he’d like to go out in the rain and scream “Stella!!” But with that voice, people would think that Area 51 lost control of one of its secret military weapons.

View the full article here.
Back